The Kings Arms Hotel is a late sixteenth century coaching inn located in the heart of the bustling Welsh market town of Abergavenny; the gateway to Wales. We offer something for everyone; comfortable, well-appointed guest accommodation, lip smackingly delicious restaurant food and a versatile function space for all manner of events. Whatever your reason for visiting – an extended getaway break, a lazy lunch meet up with friends, or a flying coffee and newspaper pit stop – we’d like to extend you the warmest of welcomes. Come in and take a look around…

Book direct and get £10 off Food & Drink We’re thrilled to announce we will be hosting our first ever Comedy Night here at the Kings Arms! Friday 5th May sees three great acts treating you to an evening of laughter!

Doors will open at 7:30pm, with acts starting at 8:00pm. Get here early to get the best seats!

Acts featured will be… 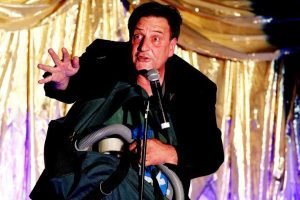 Wes Zaharuk has a world-wide reputation for a tornado-like approach to comedy, surreal feats and an eccentric collection of eye-popping prop tricks. He is a one-man tour de force, known to combine routines with power tools, bananas and film noir. Perfectly Bananas received five star reviews at the Edinburgh Festival and picked up a 2013 Buxton Fringe Award for Best Comedy (Individual). Wes credits his comic roots to his parents. They made ‘not listening’ an Olympic event. As a child, his parents dressed him in wool pants that were incredibly itchy. Complain as he would, his words fell on deaf ears. When he developed a skin condition that looked like a large, all-dressed pizza, he was tested for allergies. It was found that he was allergic to wool. Through it all, Wes developed his desire to be heard — if only to reduce rash. About the use of props in his performance Wes quips “Show business sometimes lures people who didn’t get enough love early in life. I feel as a child I didn’t get enough unsupervised time with power tools but who has perfect parents?”

“Zaharuk is mad as a box of badgers.” Graeme Bright 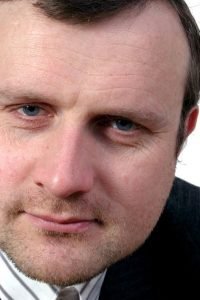 A regular on S4C and Radio Wales, Noel James is a charismatic performer whose quick wit, warmth and charm have served him well in the stand up comedy clubs of the UK and overseas. He has been involved -in the past – in both performing and writing for theatre, radio and television. His passion for acting stretches beyond the confines of just comedy; his versatility and readiness to learn new skills have opened up other avenues, including presenting and musical entertainment.

“Liberates the lunatic side to our personalities – brilliantly!” – Time Out 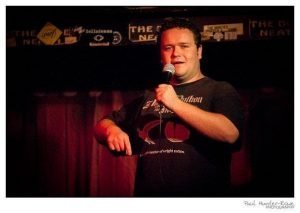 Once described as what would happen if Tim Vine hadn’t found God, Paul delivers a set that has the audience reeling from the first joke to the last. His high laugh rate has made him a hit with comedy club, art centre, theatre and university crowds up and down the UK and Ireland. He has a warm and laid back style, which together with an ever-present glint in his eye puts an audience at ease, even if they feel just a little naughty afterwards. In the appropriate environment he can make an audience feel VERY naughty. Paul unashamedly enjoys what he does and has won several minor competitions he hadn’t realised he’d entered or feels the need to put after his name.  He has a down to earth accessibility that wins crowds over everywhere and he is not afraid to interrupt his stream of gags and one liners to dip into the crowd to extract every last drop of fun. Paul has built up a cult fan base in his native Neath where he established and regularly MC’s the outlandish and acclaimed Clown’s Pocket comedy club.

“Paul is a cracking act. Some of the best written one-liners I’ve heard for a while and an open delivery which warms him to the audience” Juice Comedy

“One of the most promising comics in Wales, Paul weaves the dark and dirty into comedy gold… A solid gagsmith who is getting bigger and bigger.” Laughing Mic Comedy